It’s officially been confirmed that Ben Affleck is out as Batman. After playing The Dark Knight in only three of the current DC Films: Batman vs Superman, Suicide Squad and Justice League.

Affleck broke the news to fans in a tweet early in the hours of Thursday 31st of January whilst retweeting the mews from Deadline Hollywood.
With the Matt Reeves film still in full swing, who could we expect to see under the mask next?

“Ever since Jon Hamm played the dark and brooding role of Don Draper on Mad Men, fans have been rallying for him to play Batman. Though rumours have been circulating for years, Hamm just recently revealed that he has never had a conversation about the possibility. However, he did say he would be interested in the script was good”

“One of this generation’s coolest actors, Karl Urban is probably best known to casual audiences as Lenard “Bones” McCoy in the recent Star Trek films. He also starred in the cult classic action flick, Dredd, based on the 2000 AD comic series. Like Batman, Judge Dredd is a dispenser of brutal justice with overtly fascistic overtones. However, unlike Batman, Dredd isn’t an outlaw vigilante, but a fully legal judge, jury, and executioner… Mostly the last one”

“The star of USA’s White Collar has been on a lot of wishlists over the years: he was a fan-favourite choice to play Superman in 2013’s Man of Steel, and the fan-chosen frontrunner to portray wealthy if kinda rape-y Christian Grey in the Fifty Shades of Grey adaptation. Why not add the Caped Crusader to the list of pop culture staples for which Bomer would be perfectly cast?”

“Colin Farrell is on something of a roll these days. His output never really slowed down, but the prospect of lasting star power was touch-and-go for a while, with such high-profile bombs as the ill-advised remake of Total Recall and the colossal bomb of Winter’s Tale bogging down his resume. However, he also made a splash in his nearly unrecognizable appearance as a cruel, balding troll in Horrible Bosses, a surprise box office hit. At the same time, he’s also made sure to star in lauded movies like The Lobster and Seven Psychopaths, thus offsetting his big-budget missteps. After impressing with a solid supporting turn in the Harry Potter spin-off, Fantastic Beasts and Where to Find Them, Colin is ready to headline another blockbuster”

With the Nightwing movie still apparently in production there is the strong chance we could see who ever ends up playing him, as the new Batman. But then again, probably not. 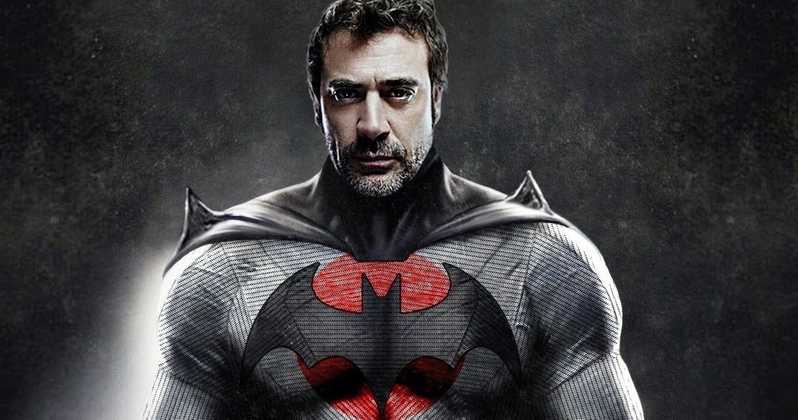 Jeffrey Dean Morgan was asked about the Flashpoint role on the red carpet for Rampage. Specifically, he was asked if the villainous character that he plays in the new movie, opposite Dwayne Johnson, could influence his portrayal of the Caped Crusaders. In reply Morgan said that he had a pretty good idea how he’d approach the role. He had this to say.

“I don’t think so. I think I would know how I would play Batman but I’ve put some thought into it.”

God I hate writing about myself! I mean who’s reading this, nobody and if you are, what the hell are you doing go and make something of yourself. I’m just a 20 something year old trying to impress you with words and bad jokes. MY GOD! This is so hard. One fact about me is that I own a 1990s map of Universal Studios Hollywood and I have never been. NOW GO! View all posts by timsaxbymedia